Today marked my first day in the “new” department. Although I officially joined three weeks ago, I’ve been out visiting clients, so this is my first taste of the new office. It’s funny how you can work for the same company, in the same role, in the same city, but things can still be so different. Travelling east along the Thames, though, seems to have opened a Pandora’s Box of administrative and other nightmares.

Nestled in amongst the soulless city of Canary Wharf, the building is part of the identikit glass box collection. The tube journey from Waterloo is my worst commute to date, and given that I have worked in approximately fifty different locations in my two and half years in audit, that’s saying something. As we near the City, the tube doors open at each stop, but no one gets on or off. The only benefit to these otherwise annoying disruptions is the chance to crane your neck out for a deep inhalation of air that isn’t filled with pungent sweat and halitosis.

At Canary Wharf it’s a different story. Hundreds of grey and black besuited clones stampede for the escalators. I watch one man stumble, after the passenger behind gave him a domino shove. Every person is being pushed, in turn pushing the person in front of them.

Ascending into the daylight I look back down the escalator. It’s a nasty sight. Ant-like human beings swarm. All in such a rush, all so busy and important. And yet not.

In all honesty, the office is impressive. So glossy that it gleams. Chrome and glass are abundant. Every woman towers and clacks around in heels, the men look sharp in their tailoring. It doesn’t quite feel real. The people are too pristine, too polished. They seem to have lost any facial expression, their very blankness conveying professionalism; there’s no room for emotion here.

The lift takes an age to reach the twelfth floor, with people getting in and out at every level. I peer out to see what mysteries take place on each. I don’t understand most of the descriptions on the signs. Business Intelligence. Crowd Connection. Transforming Operations. They seem as artificial, as unreal as the people click-clacking around.

When I get to my desk I ask around, trying to find my manager for the week ahead. No one seems to have heard of her. I walk up and down, looking at each desk’s name badge, trying to track her down. Hot Desk 3A.06, Hot Desk 3B.13, Hot Desk 3D.26. Not much help.

The worker-ants sit in silence, tip-tapping their keyboards tirelessly. At lunch time I look around, but no one else is moving. I decide to go it alone, taking a book to read. By the time I get back, everyone else is in the same place, tapping away still. I keep looking up, wondering if anyone will go for lunch. Two o’clock passes, then three o’clock. Tap, tap, tap. No movement.

Mid-afternoon I decide to engage in conversation, and ask the person next to me if I can get a cup of tea somewhere in the building. She looks at me as though I am speaking another language entirely. So much so that I review in my own head what I have just asked, checking that I was speaking English, and not asking an especially crazy question.

“I… think… the eighth floor?” she answers, looking rather nervous.

I try to continue the conversation, explaining that I’m new to the building, and don’t know my way around yet. In response I get another confused look, and she turns back to her screen. It’s rather disconcerting. They don’t appear to eat, drink, speak or go to the toilet.

On the eighth floor I am told that the café has closed for the afternoon, and that I should try the eleventh floor instead. More lift-waiting ensues. Finally one arrives, and I try the “engaging in conversation” thing once more.

“Do you know where I can get a cup of tea around here?” I ask with my friendliest smile to the man already in the lift.

“It’s just that I’m new to this building, and I don’t know where anything is yet” I continue, smiling away.

Back at my desk, perked up with caffeine, I muse on whether these people will go home at some point, or just keep typing away all night. I think I might have to make an executive decision and actually leave on time today. It’s not as if anyone will actually say anything if I do… 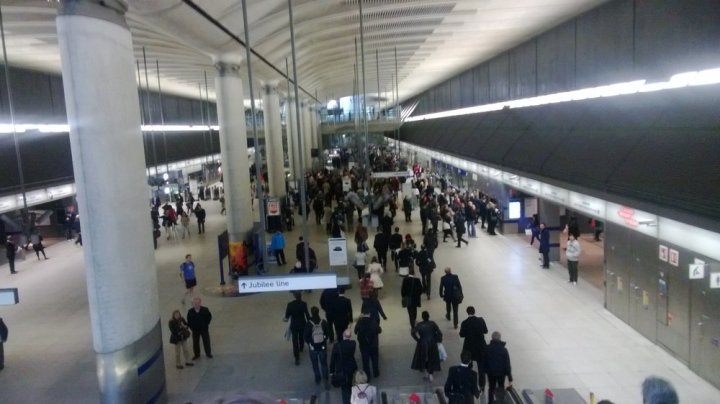