For my whole life I’ve been surrounded by male dominated box office hits. Films starring, and often also directed, produced and written by men. James Bond, Harry Potter, Jason Bourne, superhero films, and even Toy Story. When I think of the women in these films, they’re usually the pretty love interest – or lust interest, let’s be honest – or the supporting character.

In my whole life I don’t recall a single box office smash female superhero film. Sure, Chloë Grace Moretz was incredible as Hit Girl and I’m sure Scarlett Johansson was mighty fine as Black Widow. But, for the most part, action films feature a strong male lead, perhaps featuring a sexy female assistant, for the eye candy. The male character is always always the hero, rescuing a weak, but beautiful, woman, perhaps exploiting her afterwards for his own sexual gratification.

Then Wonder Woman came along. Directed by a woman. I had to see this film, this rare thing: a powerful woman, saving the world.

The lights go down and the film starts. The first twenty minutes is inspiring, invigorating. Along with little girl Diana, we overlook a field full of tough, kickass women fighting. Crazy, acrobatic, incredible fighting. A lump comes to my throat as I realise that I have never seen a powerful scene featuring just female warriors. I feel overcome.

Wonder Woman looks incredible; beautiful, charming and all upper arm muscle. And her good looks are matched by her strong character traits. She is ambitious, tenacious and brave. She says things like ‘It is our sacred duty to defend the world. And that is what I am going to do.’ Wow. 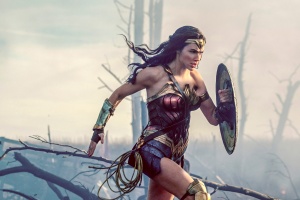 When the first male character, Steve, appears, Diana leaps from a clifftop into the sea to save him from drowning. Fantastic. But then war begins and things turn sour. Steve turns up to take her place on the battlefield, instructing her to wait behind a rock while he sorts things out. Yet again, the female in the film becomes a weak, pathetic figure. Yes, ultimately she stands up and shows her power, but why make her prove herself as a woman in the first place? This film is an opportunity to inspire little girls and women around the world. Why remind them that the odds are stacked against them?

It happens again, then a third time, then a fourth. In every opportunity for action, Steve holds Diana back. While Steve is in practical clothes for war and winter weather, Diana is in heels. Diana wears her iconic mini dress armour, which works pretty well in the paradise island of Themyscira, but less well on snowy battlefields.

In this female-directed, female-led film, there is casual sexism at the expense of women throughout. Again, yes, our girl shrugs it off. But why have it at all? Why highlight her disadvantageous gender at all when she’s such a strong, inspiring hero, irrespective of her sex?

In the final scenes, the film’s resounding message comes through. Wonder Woman realises that all her power and strength is worthless without a man in her life. ‘Only love will truly save the world’ she says, with saccharine finality.

The film moves forward to the present day. With the male love interest gone, our heroine is redundant once more. She’s still pretty, of course. But she has a desk job now; much less threatening, much more fitting for a woman. All thoughts of those fired-up days of fighting are a faded memory – literally – in a grainy black and white photograph. As the film closes, female strength is now just a wispy image. Back I go into real life as I leave the cinema. The world tipped the right way up again, men on top once more.

And for an alternative view: