So it turns out it was all a bit of fun. The Sun, which never said it had dropped topless models on page 3, hasn’t in fact dropped topless models on page 3. Hilarious. When the first few whispers started appearing saying that it had ended, I was sceptical. I’ve spent the last year or so campaigning with No More Page 3, badgering friends, family, colleagues and total strangers to sign our change.org petition. Recently I’ve felt less hopeful, worried that the harder we pressured the Sun to drop the topless models, the more they would dig their heels in and want to keep them. So I couldn’t quite believe it.

Yesterday, when I started writing this article, the petition (‘David Dinsmore, editor of the Sun newspaper, please take the bare boobs out of the Sun’) had 217,487 supporters. Today, with the help of plenty of free publicity (thanks, the Sun!) it’s on 218,254. The campaign is more famous than ever before. The No More Page 3 group works tirelessly. As well as twitter coverage from early morning to bedtime, we’ve done countless events, protests outside News Corp HQ, attempted to get a Christmas single to number one, we’ve got the support of Unison and other trades union, the National Assembly of Wales and the Scottish Parliament, Breast Cancer UK, Mumsnet, Girlguiding UK and many, many more. I am proud to be part of a campaigning group with such an inspirational group of people, including founder Lucy-Anne Holmes and, as acclaimed by the Guardian, ‘young feminist hero’ and ‘rising star of 2015’, Yas Necati.

Female nudity. It’s a complex topic. As a group we have always been happy to let the hating trolls know that we are most definitely not opposed to women’s breasts or bodies. In fact, we love them, and have celebrated female beauty in all of its wondrous forms throughout our campaign. As Robert Crampton wrote in the Times on Wednesday, back in the day the only way for a 16 year old boy to ‘look at boobs… was the unmitigated hell of reaching up to the top shelf for a copy of Mayfair or Club or Escort… cheeks burning with shame.’ Nowadays that’s not an issue. Any self-respecting 16 (or 14 or 12) year old boy knows how to access free porn online without leaving a trace. For men who can’t get through the day without seeing a perky pair, there are at least several other options available aside from a family newspaper.

The Sun does, by the way, market itself as a ‘family newspaper’, with regular front page giveaways featuring Cbeebies or Disney characters to attract kids’ interest. Yet what is the paper trying to teach our kids about women and their place in society? As Lucy-Anne Holmes noticed in 2012, the ‘largest female image in The Sun newspaper [i]s of a young woman showing her breasts for men’ even when Jessica Ennis had just won her gold medal in the London Olympics.

The thing that we have been trying to convey is that Page 3 is so 1970s, so cheesy, so passé, so Carry On. In the 70’s women celebrated their newfound sexual freedom by showing their naked bodies, in the 80’s they adopted shoulder pads to ‘man-up’, and in the 90’s ladies became ladettes, binge drinking and brawling in the streets. But now, in 2015, we have moved on again. Rather than emulating men through fashion or fighting we want to be taken seriously in our own right. That means having women in the newspaper for their actions and achievements rather than for their value as objects for men to approve or disapprove of.

When I read about the brutal treatment Clare Short faced when she campaigned for an end to Page 3 back in 1986, I was appalled. The national mood was anti-feminist. Feminists, critics claimed then as well as now, are hairy, ugly and, of course, jealous. Anyone campaigning for a more equal treatment of men and women is a killjoy, a prude, encouraging censorship and an end to press freedom. I am so grateful to live in 2015, despite the twitter trolls and triumphant twits at the Sun. I am so grateful to all of the women and men who have gone before me, standing up for sexual equality, and to all of those who continue to fight today. The Sun has made a boob. The fight goes on. #NoMorePage3 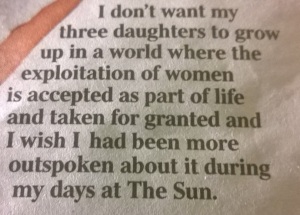